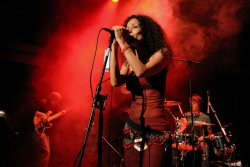 Czech Republic
Tracks
Videos
Photos
About
ABOUT
Al-Yaman means Yemen. It also means get-together and co-operation of people from different sides of barricade - during whole existence of the band an Arabic singer and Israeli drummer, many Czech musicians, French or American MC, UK transglobalistas, Indian guitarist or Swedish bass player met and played together. And it’s also a band based in the magical heart of Europe, Prague, which comes with diverse and extensive attitude of multicultural creativity and direct message of unity… LET`S UNITE !

Music of this Prague’s outfit is inspired by traditional and popular songs of Yemen and other countries of Arabic world, its sound is a fusion of acoustic instruments and electronic beats – a new trance-oriental-electro-dance-beat.

Yemeni singer Ashwaq Abdulla Kulaib brings a strong Arabic influence into the music. Her singing is an emotional expression mainly of traditional arabic spiritual songs, her own experiences of life, dreaming and searching for respect and freedom.

Ashwaq came to Prague in 1990 from Aden, Yemen to study and stayed. As she is a heart of the band then composer, multiinstrumentalist and producer Al-esh (guitar, saz, keyboards, sampler) is its musical brain. Since 1986 as a musician or producer he has worked with various Czech top bands and artists. In 2000 he met Ashwaq and took the opportunity to form a project of oriental music, using modern technologies and traditional instruments. The other band's musicians are the most respected Czech musicians, active in many other Czech professional bands and musical projects. Occasionally also famous Indian guitar and sitar player and singer Amit Chatterjee (Joe Zawinul, Sting, Santana and many more) and Algerian-French MC Al Amdiez share the band’s live shows.

Very quickly after its first live performance in 2001, the band became a regular member of both club and festival scene in the Czech republic. Innovative, fresh and attractive sound, fusion of Arabic tunes, ragga, dub and electronic dance music elements together with traditional acoustic instruments and last but not at least exotic voice and stage show of the singer Ashwaq, this all has brought huge response and respect to the band. Both Al-esh and Ashwaq have got many proposals for co-operation from such a names like Transglobal Underground, Asian Dub Foundation or Natasha Atlas, to name a few only.