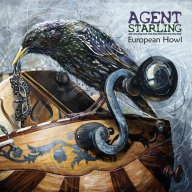 If you would like to play them on your show we would be delighted.

I’ve attached two tracks and you can download the full album of radio edits from this link: https://drive.google.com/drive/folders/1oe7xd9EE0UuZpVscAykND1DxEDJU23Hz?usp=sharing

If you would like the full album let us know and we can send you a zip of MP3s.

Agent Starling are Quentin Budworth hurdy-gurdy and Lou Loudhailer voices & other instruments. Recorded in the first three months of 2021, European Howl also features Dexter Duffy-Howard on violin and cello. Recorded in Yorkshire UK by Agent Starling, the album was mastered in Oregon by Kevin Carafa.

The album is influenced by musical traditions from nations across Europe. A mix of instrumental pieces, spoken word and songs, themes range from a miscellany of Greek Tales (Wine Dark Sea), an elegy by a dying lover (Requiem) to Helicopter Arms, inspired by the glorious gurdy tune at the heart of the song. Delores County Ride is a tribute to the women who hop trains in Arno Bitschy’s film This Train I Ride, and the album’s title track is an ode to being European, a call for connection in today’s isolationist climate.

Quentin and Lou both have strong musical provenance. Lou was originally in prophetic UK Indie band Red Guitars and has gigged and recorded ever since, heading up psychedelic rock band Loudhailer Electric Company. Originally part of Suns of Arqa, Quentin is the force behind world fusion medieval rave band Celtarabia, also featuring Lou on bass. He spent the year before lockdown touring Europe meeting with other top hurdy-gurdy players exchanging tunes, techniques and experiences. The band usually play the alternative festival circuit throughout the summer, but due to lockdown restrictions on live music, Lou and Quentin joined forces to create Agent Starling and record European Howl.

European Howl releases on all the usual digital outlets on May 4th, 2021 on the DHM record label, catalogue number DHM028, distributed by Label Worx.

“This is wonderful. It has a feeling of antiquity and a feeling of something new. The music is a blast and the images are a constant wow.” Dan Kellaway (Luthier)

“Great video and what a wonderful, unusual sound.” Aine Kennedy

“Beautiful in every way. The music, the playing and the photography are all amazing.” Richard Harries

“This is wonderful. Love the fluid bass figures.” Landi Michaels

To get your copy of European Howl go to: https://loudhaileruk.bandcamp.com/album/european-howl

The first Agent Starling album is due for realease on Bandcamp later this year. Until then you can listen to album preview tracks and see the videos on... more