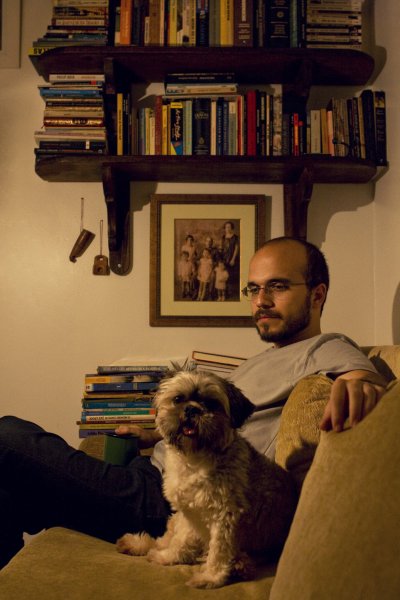 Sua
by Túlio Borges
See all tracks (12)
ABOUT
Brazilian translator Túlio Borges worships the muse like in the time of daintiness. “I

never wanted to work with music fretting to lose the pleasure in playing,” he confesses,

now premiering, at the age of 29, with his beautiful, multifaceted album Eu venho

vagando no ar [I come wandering in the air], which came out after a long, close

relationship with the art. Borges studied piano in the Music School of Brasília, recorded

jingles, took part in a jazz band and in a school choir when he lived in the US—where

he toured and won prizes in music festivals. Even though he wrote music since his

childhood, only when he was 23 and living in London did he start compiling his work

(he had nigh 40 songs), which he would record once back to Brazil. In his homeland,

he started to take part in festivals. Among other prizes, he was awarded first place in

Paulo’s state, which had two important musicians of the Brazilian musical scenario—

In one of these festivals he met a singer from Rio de Janeiro called Vytória Rudan, with

whom he became stage partners. In the album, she participates both in the seducing

brings peace to a heart]), filled with cuíca, tamborim and acoustic guitar, and in the

am/ to find within me the map]), where the vocal duo is performed with great intensity.

Also sharing the microphones with Túlio comes Ms Inácia, who raised him and has

worked for his family for 35 years. “It’s her that maybe has influenced me the most,” he

analyzes. “She was the one who brought home black music, popular music, music from

the Northeast, and the stories,” he tells. She opens the album with Túlio in Pontos,

which is a song that is in public domain; “songs that I caught her singing while working,

songs that she hadn’t even realized she knew by heart, so sweet and melodious.” Ms

Inácia Maria da Conceição, born in Piauí, solos in the last part of the song. “The idea

was to record the parts with accompaniment that would add value to them, and that

the recording was a thanks in life for the support that Ms Inácia gives me, as simply as

with a hug and a kiss that cleanse the soul, so sincere and pure they are,” defines the

primed by talented Túlio’s urbanity. Like in the song resembling a baião Trem [Train],

opened by a percussion emulating this means of transport, and has a passage with

crackles]). From regional Túlio skips to universal in the jazzy Shirley, a profusion of

sensual images brought out by the very singer’s guitar and by Geni Castro’s. From this

mood, he leaps to the not less involving Birosca, a samba with cuíca, cavaco, clarinet,

strapless blouse/ notice the size of her skirt/ and how much damage is done].

The samba, the urbanity, and the mysticism are the Brazilian-typical qualities in Altar,

one Redeemer]), which is also a duet with Fred Martins, a songwriter from Rio de

accordion, is among the most breath-taking songs in the album. The web of words in

Cicatriz (que saudade me dói, devora/ as lembranças do outono outrora [I miss them

so much it hurts, it devours me/ the memories from a fall foregone]), bound together

by Leandro Braga’s piano, underscores the communion of the singer/songwriter with

same musician who established the percussion in Pontos), prepares the devastating

impact of the title track, which closes the record. Prefaced by a suspended fife, the

lyrics shine as a sparkling jewel, a manifest of this unique artist.