This Tale Of Ours 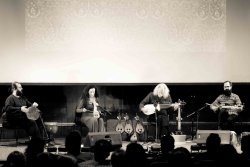 Canada
Videos
About
ABOUT
“This tale of ours”

“This tale of ours” is a quartet made up of two Toronto musicians, Araz Salek and Pedram KhavarZamini, and two from Crete, Ross Daly and Kelly Thoma. Their music, which includes originalcompositions, arrangements of older pieces, and passages of improvisation, begins from the members’ deep knowledge of Iranian, Cretan, and Ottoman music, but spirals into a broader geography, from the Balkans to the Caucasus, while imbued with an original voice. The quartet came together in 2012 and has studied, rehearsed, and performed together in Canada and Greece, drawing audiences of 300 to 400 to their Toronto concerts in 2013 and 2016. The members of the quartet are significant musicians individually: Ross Daly (www.rossdaly.gr) is a major figure in world music circles as well as a highly respected performer and teacher of Cretan and Ottoman music; Kelly Thoma (www.kellythoma.com) is an internationally presented lyra player and composer; Pedram Khavar-Zamini is recognized as one of the top players and teachers of the tombak globally; and Araz Salek, a tar “virtuoso” (WholeNote Magazine) has performed and taughttar and setar internationally. Ross was born in Ireland but has made Crete his home for 35 years; Pedram and Araz were both born in Iran but have become Torontonians – not surprisingly, the quartet “This tale of ours” makes music that crosses borders without forgetting where it is from.

The modal musical traditions which are ubiquitously encountered between West Africa and Western China have many millennia behind them of assimilating the inspirations of musicians from a myriad of different cultures into a singularly streamlined and efficient concept of music itself. A concept which simultaneously binds all of these cultures into a coherent whole as well as allowing full rein to each to develop and advance in its own way and on its own terms. Few would deny the central role which has been played here by the ancient civilizations of the Persians and the Greeks. Both cultures have well documented musical histories going back to antiquity as well as a vibrant and creative present. Both cultures have also inspired and influenced the music of other peoples as well as having received significant influences themselves from distant lands with which they had contact. The conditions for intercultural dialogue are both especially ripe as well as particularly urgent in today&#39;s world where, despite the increased ease of contact (due totechnology), there is also frequently an increase in levels of turmoil and strife. There are many reasons for this but suffice it to say that the medium of music is undisputedly one of the most effective means of highlighting the reality of human brotherhood and unity as well as of clearly demonstrating the futility of sectarian and ethnic division. The four musicians who, in 2012, inaugurated the project known as quot;This tale of ours&quot;, Araz Salek, Pedram Khavar-Zamini, Kelly Thoma and Ross Daly ostensibly stem from the world of Persian and Greek music, although each has considerable experience and interest in working beyond the boundaries of any specific ethnic or regional culture. All of the participants place particular emphasis on the dimension of contemporary creativity drawing its influence from timeless traditions, as well as on an open and receptive approach to all of the traditions of the broader modal world. The title of the project is drawn from the poetry of the great 13th century mystic Jalaluddin Rumi who, perhaps uniquelytranscended cultural, religious and regional borders thus managing to communicate his message of the innate unity of the human and the divine in a loving embrace in such a way as to be an inspiration to all. &quot;This tale of ours&quot; is the open and unconditional celebration of this unity through the medium of music where all are welcome as they are.