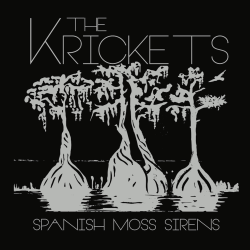 United States
About
ABOUT
IMEA Folk artists of the year, The Krickets came together for a cause, and found a community. Now the swamp-folk foursome is bringing their earthy music and sweet, spellbinding vocal harmonies beyond the Florida panhandle with Spanish Moss Sirens, the debut from Melissa Bowman, Lauren Spring, Emily Stuckey and Katrina Kolb.

Produced by Ben Tanner of Alabama Shakes, Spanish Moss Sirens mixes folk, bluegrass, blues and gospel on eight homey original songs (and two covers) honoring the Krickets’ roots: family, friends and the ethereal landscape that surrounds them along Florida’s Emerald Coast. It was there, in the little town of Port St. Joe, that Spring began assembling the Krickets more or less by accident — or maybe it was serendipity.

Spring had been playing in her husband’s band when she was invited to perform at a benefit in memory of a 22-year-old woman who had died of breast cancer. “I knew I couldn’t carry the gig by myself,” the singer and songwriter says. She asked Bowman to help. “I didn’t know her, but I knew she was a talented guitarist and singer, so I called her on a whim,” Spring says.

They had too much fun singing together to stop after the benefit. Bowman suggested they add Stuckey, a singer and songwriter she knew from Alabama. Stuckey had played with Kolb, and recommended recruiting her to play bass. “When we heard the three-part harmony, everybody had that moment, and the clouds parted,” Spring says. “It was intoxicating.”

It didn’t take long to come up with a name for their band: the benefit Spring and Bowman had played was held in memory of Kristina “Cricket” Russell, whose cancer went undetected because she didn’t have the money to pay for a mammogram. With the blessing of Russell’s family, the band became the Krickets — and they’re donating $1 from every album sold to the Cricket Fund, which helps pay for mammograms for women without insurance or who couldn’t otherwise afford one.

If the band’s name is a tribute to Cricket Russell, the musicians wrote many of the songs on Spanish Moss Sirens in honor of loved ones. Bowman and Kolb had each recently lost their fathers, while Stuckey, who was pregnant while making the record, wrote a song for her baby son. “We had a lot of honoring to do, and we hope that comes through,” Spring says.

Spanish Moss Sirens features Bowman on vocals, guitar and banjo; Spring on vocals, guitar, fiddle and mandolin; Stuckey on vocals, guitar, percussion and mandolin; and Kolb on bass. Each woman brought in songs that they helped each other flesh out, and the three singers swapped vocal parts until they found the ones that best fit their voices. “It’s weird how it all came together,” Stuckey says. “We had some late nights, and when you’re half-awake like that, some magical things come out.”

Recording Spanish Moss Sirens in Muscle Shoals, Alabama, was a must. Bowman’s father had been friends with the Swampers, the house band first at FAME Studios and then at Muscle Shoals Sound, and the area is deeply meaningful to her. But Muscle Shoals Sound was under renovation, and something about FAME just didn’t click with the Krickets. So they ended up at nearby Sundrop Sound, the studio owned by John Paul White and Tanner, who agreed to produce Spanish Moss Sirens.

“We felt the vibe,” Spring says. “We felt like he got us. Our record is not the most polished record you’ve heard, it’s earthy and organic, and Ben kept it that way. He wanted the vocals live, and the instruments played live. We wanted to come across as very authentic.”

There’s more to the Krickets’ authenticity than their music: the quartet has become close friends, too. “It’s special, because there’s that music connection on top of them being really cool people,” Spring says. “The music comes before the ego, and that kind of giving nature has helped lay the foundation for a great friendship.”

Follow
Send Message
About
IMEA Folk artists of the year, The Krickets came together for a cause, and found a community. Now the swamp-folk foursome is bringing their earthy music and sweet, spellbinding vocal harmonies beyond the Florida panhandle with Spanish Moss Sirens, the debut from Melissa Bowman, Lauren Spring, Emily Stuckey and Katrina Kolb.