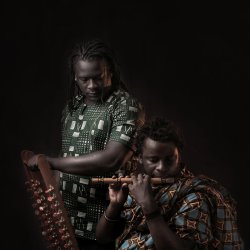 Uganda
Tracks
Videos
Photos
About
ABOUT
ABOUT SSEWA SSEWA & GIOVANNI

Two of Uganda’s folk & multi- instrumentalist Ssewa kiryanga James and Giovanni Kremer Kiyingi unique sound is defined by rich instrumental textures and rhythmic influences from Uganda, Africa and beyond. Innovative and all-rounded artists the two have since the start of 2017 joined their efforts to promote folk music and traditional instruments on the world through collaboration and mentoring up and coming artists.

Since coming together, Kiyingi and Ssewa have gone on to make appearances at intimate and large events such as Blankets & Wine, DoaDoa Performing Arts Market and Sofar Sounds in Uganda, worked on collaborations with other up and coming acts such as Samuel Nalangira. The two acts bring together a wealth of knowledge having worked in the industry independently and are currently working on their first album Tuwaye which they expect to be out later this year.

Ssewa is the Founder of Janzi Band who also designs instruments like the JANZI and mentors young artists. His music is a cross-cultural marriage between Uganda and the World, which seeks to reassert Ugandan traditions while modernizing and interweaving them with Folk, World, Soul, Jazz and other international genres to renew the spirit within his indigenous culture.

Born in a musical family, Ssewa Ssewa began his artistic journey as a baby. He has toured the world sharing pieces of his soulful and world music. Through performing Ugandan and World Music, Ssewa Ssewa is privileged to have entertained audiences at home and abroad. Plays an array of instruments like Adungu,Akoga,Endongo,Endingidi,Amadinda,Mbira,Engoma/Percussions and Janzi an instrument he designed and makes.

On the other hand having ventured into music while at Makerere University, Kiyingi’s music is informed by the culture of his people and is a medium to tell the new generation about the country’s rich cultural history. He plays indigenous instruments like Tube fiddle (Endingidi), Thumb Piano (Akogo), African harp (Adungu) and Traditional flute (Endere) etc. To date, Kiyingi has released three albums, Amakondere is his latest album released in 2016.

Together, Ssewa and Kiyingi have their eyes focused on promoting their cultural heritage and to continue telling stories that inspire, educate and entertain. They are now looking to collaborate with other acts beyond the Ugandan borders and conquer new musical stages across the world.