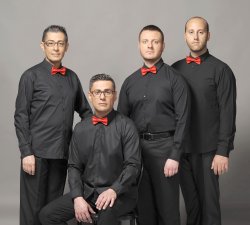 Bulgaria
Tracks
Videos
Photos
About
ABOUT
Male acappella vocal quartet gives deep depiction of the ancient Bulgarian folklore, and polyphonic works of Orthodox sacred music. They explore and introduce the ancient hymns, unknown until now. These are the masterpieces of Bulgarian monophonic music and its manifestations during the centuries. In 2012 the Svetoglas formation released their first music project called "The Wheel of Life" in which are presented, in chronological order, Traditional music and Bulgarian Orthodox Church songs about the birth, life, death and the afterlife.

In 2014 Svetoglas relizes several recordings of ancient ecclesiastical chants for the second independent project "Ancient Orthodox Hymns". The formation has made numerous vocal and film recordings for the Bulgarian National Radio and Television and had many prestigious tours in Russia, England, Norway, Belgium, Spain, Colombia and Italy.