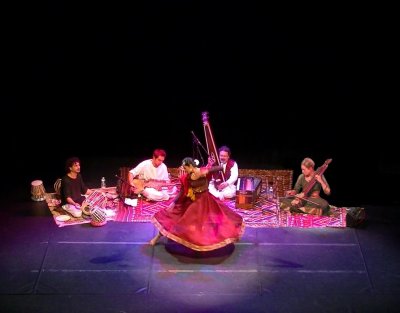 ABOUT
Sangeet Quintet is based in France, Lyon area, and was created in 2014 by very talentuous musicians and dancers from Afghanistan, Pakistan and France. This ensemble performs a "total art" called the "sangeet" in hindi language, describing a combination of sacred arts like instrumental and vocal music, dance, theater, litterature and poetry. The musical and choregraphical systems presented are the so called "hidustani"music (North Indian system including a large cultural area from North Afghanistan to South India's) and the sufi Kathak. Sangeet Quintet presents a well balanced and very fine show, letting us to travel among marvels and treasures of Eastern fairy tales andphilosophies, which were or are stillspreaded by Persian and Indian poets and the Wise.

The duration of the show can be adapted to the demand : between 30 minutes and 3 hours, according your needs.