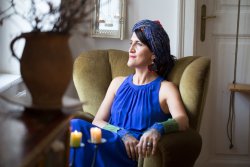 SAKINA began her career self taught, as an autodidact, before she received professional education and voice training.
In the 90's she was a member of the Mesopotamian Culture Centre, a Kurdish artists association based in Istanbul but acting throughout all of Turkey. Its members suffered various reprisals by the government because of their Kurdish lyrics. Some of them paid their artistic dedication with their lives.
During this time she organized many (due to the government led forbiddance of the Kurdish language until the late 90s) illegal concerts, until eventually she was forced to flee.
She continued her work in Armenia, Syria and Kurdish-Irak.
Currently she is living in Vienna.

Ahmet TIRGIL, born in 1982 in Erzurum, completed his primary and secondary education in Samsun. He took folk instrument with three double strings lessons from Ali Özdolap, a retired teacher. He attended Karadeniz Technical University, Department of Music between 1999 and 2000. Graduating from the school, he enrolled at Marmara University, Department of Music in 2000. He completed his bachelor’s and master’s degrees at Marmara University.

Ahmet Tirgil began playing violin at the university in 2000. He continued his violin studies with Olexander Samolyenko who is the chief violinist at Istanbul State Opera and Ballet.

Ahmet Tirgil continued his music studies at Paul Hindemith Music School in Berlin for a while. He also continued his violin studies with Matthias Leipold.

He returned to Turkey in 2009 and began to live in Dersim after the year 2010. He is currently living in Dersim and working as a music teacher.

He went on tours with his group, the Metin&Kemal Kahraman Ensemble and Mehmet Atli, in Turkey and abroad with the purpose of presenting samples of Anatolian Folk Music. He performed with orchestras such as the CRR Istanbul Symphony Orchestra, the Yeditepe University Astare Chamber Orchestra and the Marmara Univesity Academic Orchestra and gave various concerts.

Utku Baris ANDAÇ, born in 1987 in Izmit, began his music training at the Kocaeli Fine Arts High School in 2001. He continued his violin studies with Nebil Gökay who is the Izmir State Opera and Balet Orchestra Violinist.

Graduating in 2005, he enrolled at the Department of Music at Marmara University. He continued his violin studies with Prof. Dr. Cemalettin Göbelez during his undergraduate education. Within that period, he performed as the first violinist and chief violinist in groups such as Iz-Is Chamber Musical Group, Marmara University Academic Orchestra, Chamber Orchestra of Kocaeli Chamber of Industry. In 2009 he enrolled at the Masters Degree Program of Violin Branch..

He continued his studies with Çigdem Iyicil and Ildigo Moog for a while. He showed active participation in atelier works of Atilla Aldemir. He worked as a violin teacher at the Department of Musc at Marmara University between 2009 and 2010. Having compositions and compilations in several forms, Andaç is currently doing his master’s degree in the field of violin training. He is the chief violinist at the Marmara University Chamber Orchestra and works as a music teacher at the Kadiköy Municipality Children’s Art Center and Kocaeli State Conservatory.

Between 2010 and 2011, he gave extraordinary concerts with his friends and the Last River Nature Orchestra which was formed by him, with the purpose of raising awareness for nature and the destruction of cultural heritage in many regions in Anatolia.

Ozan Nabi AKIN, born in 1987, began his violin training at the Samsun First Step Anatolia Fine Arts High School. In 2006 he enrolled in Marmara University and in 2008, Istanbul University, State Conservatory, Main Art Branch. Graduating from the Marmara University, Department of Music in 2010, AKIN continues his master’s degree program at the same university.

Living in Istanbul since 2006, AKIN is currently working as a music teacher at Istanbul Atasehir Municipality.

He performed with orchestras such as the Marmara University Academi Orchestra and the Samsun Firstep Anatola Fine Art High School Orchestra. He has taken part in several music festivals, he has also gave concerts in Turkey and abroad.

Ismail KAYA, born in 1988, began his cello training at the Samsun Firststep Anatolia Fine Arts High School. He enrolled at Marmara University in 2007. He is currently continuing his training at the university as a 4th grade student. He performs studies with Sami ÖZTOP and Ramiz Melik ASLANOV.

Some of the projects he took part in include;

Concerts in Turkey and abroad with the Istanbul University State Conservatory Symphony Orchestra and the Marmara University Academic Orchestra.

He attended music festivals in countries such as Poland, Hungary and Italy.