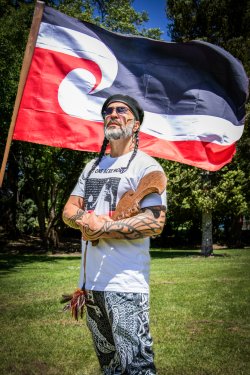 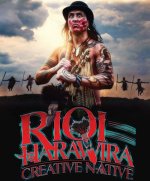 Riqi Harawira is a man of many talents; aside from being known as the former Dead Flowers guitarist, he's also a counsellor, and he leads courses which teach Maori customs. He often discusses his early life frankly, and having come out of a tumultuous number of years, he uses it to craft his music. His latest single Ruapekapeka takes inspiration from his forebears as well as history of Aotearoa's Land Wars, and it is sung almost entirely in Te Reo Maori.
Muzic.net.nz's Steve S had the great privilege of having Riqi take time and discuss in detail his greatest influences, new music in the works, how the latest video for Ruapekapeka was filmed, and more.

First round’s on me - What’ll you be having?

Mac’s Gold, because it’s local. A surprisingly large amount of our brewers are owned by offshore big-corps.

Care to list for us your five biggest influences? Can be either musical or non-musical.

Bob Marley for his pure conscious kaupapa and his earnest vocals, he has my heart.

Prince for his sleek and sexy style of playing, and his total boss attitude. The fact he is a half-caste is not wasted on me either. As a mixed-race kid growing up myself he was an example of how combining two different cultures could be a potent, melodic elixir. Prince had so much soul and aptitude as an artist. Much like Lenny Kravitz too.

Miles Davis because he is a mean mofo and reinvented the Jazz idiom. Nobody f**ed with Miles, except racist police. He was a master of free-styling.

Now, I’m going to cheat here: Stevie Ray Vaughn, Jimmy Page, Gary Moore, Peter Frampton & Jimi Hendrix are my favourite guitarists because they become unhinged and unrestricted in their wairua and technique when they play. Their signature styles go beyond technical abilities & can only be described as Ariki or Atua, other-worldly, Rangatira, high ranking aristocrats of the guitar realm.

What was the most rewarding thing you got up to whilst in lockdown?

I was still getting paid, which was really nice, and it afforded me the time to focus on my Mau rakau and fitness, which I love. I am not only working towards a new grading next year, but I am also helping others to achieve their grades. The kaupapa teaches you about Unity and serving others. It’s a responsibility to the kaupapa of Te Whare Tu taua o Aotearoa to give back to the kaupapa and not just take from it. Helping others is encouraged. Part of my grade is to learn how to teach so I get more responsibility put on me by higher ranking Pou (Posts) and my teachers to assist them in bringing mana to our peka (branch).

What do you personally believe makes a great song "great"?

I love a killer bass line or guitar riff. But, whatever genre it is and whatever level of playing it is, it has to be honest and delivered with truth and sincerity of the heart. There is a Maori word 'Mauri' which means life-force. I’m always trying to write songs that support themselves with their own Mauri and Identity. They can stand alone and have a style or signature that is universal.

Your single Ruapekapeka is a hard rock tune sung in Te Reo; what compelled you to write about this particular historical battle?

Since moving back to my Turangawaewae Ahipara in the far north I have been delving in to a lot of Maori kaupapa. I’ve also picked up more Te reo Maori and being in the stomping grounds of my father (Te Rarawa, Te Aupouri) and our ancestors which has fed my wairua. I train with Te whare Tu taua o Aotearoa which is an international school of Maori weaponry developed by Pita Sharples and has thousands of followers worldwide. It is a high honour for me to learn the ways of the warrior, and to wield the Taiaha is a boyhood dream of mine, especially as I have been learning from my own people Kohao Tu taua o Ngapuhi. The North is full of beautiful Maori kaupapa, and you are often included or asked to tautoko and represent.

My fiance and I visited Ruapekapeka pa in 2018 and I was inspired to learn more about it and write the song. I had this killer riff already and decided it was a great fit and it was meant to be the chassis to carry this kaupapa. I wanted to create something that was uniquely bespoke to my iwi Ngapuhi. Something I could leave behind, something for new generations to instil some inspiration and make the great accomplishments of our ancestors relevant again. My father is buried at Te Ahu Ahu in Ohaeawai which is a battle that we cover in the song Ruapekapeka. It's Hone Heke's maunga and that's where I will end up one day next to my father.

The accompanying music video to Ruapekapeka is both detailed and epic; where was it filmed, how long did it take to shoot, and how many people were involved with filming?

The video was shot exclusively at Ruapekapeka pa in Towai, north of Whangarei. Originally I had planned to film in Auckland on a green screen, but in hindsight, I wasn't thinking big enough, but after meeting Kawiti’s descendants, Kaumatua Hirini Henare, and Kawiti’s great-grandson Ken Kawiti of Ngati Hine, I was welcomed onto their marae, which gave me the tohu (sign) that I was meant to film at the pa. I had the honour of having members of Te Kohao Tu taua o Ngapuhi and members from our Peka (branch) in Kaitaia Nga Taniwha o Muriwhenua support me as an Opetaua (war party) who participated in the fight scenes. That is genuine mahi from Te whare Tu Taua! As producer on this music video, it is my job to think outside the square & acquire all the right parts to make the project successful. One of my visions was to acquire the re-enactment footage we used from South Seas Film and Television, which saved us Thousands in the end.

Overcoming addiction is something you wear proudly on your sleeve; what advice would you give to someone dealing with addiction?

You cannot do it alone, because even if you stop, you will only be stopping the symptoms. Get professional help. Getting an assessment from a trained clinician is the best first step. Salvation Army have a great one to singular or group programmes. N.A. meetings are really good for the soul. It’s in the fellowship of these programmes that you learn new tools. These are all walk-in, off-the-street foundations. There’s no judgement; empathy and support are prime ethics involved with these institutions. It’s where I got my start in recovery, and after all these years, I am back at Salvation Army learning how to become an addictions therapist myself.

What does New Zealand music personally mean to you? And what changes would you like to see?

My father was the first Maori to perform on 6 continents of the world in 1955. When he was in America he had to sit on the Black side of the bus. He was a young Maori boy from the far north performing for the Queen on two occasions, and he performed with Nat King Cole, plus a string of other accomplishments. When he returned to NZ he had a record deal, and even cut an album which we had stored away until after his death 1990. Unfortunately, the album was lost and like the record deal, it never saw the light of day. Part of my motivation for being an artist is to continue the positive aspects of my father’s legacy and to carry his torch with pride.

Streaming rates should be better; musicians get even better when they are remunerated properly.

In what ways have you seen the use of Te Reo Maori in Kiwi music change over the years?

It has become more complex and stronger because the kohanga reo and Kura kaupapa generation from the 80’s are confident speakers, and have taken Te Reo to higher and different places.

Which Kiwi artists or bands have you been listening to lots of recently?

What’s coming up on your musical horizon? New music in the works? Are there any gigs planned over the next few months?

I am working on a follow-up to Ruapekapeka. It’s called Take the Power Back, which is a freedom fighters’ song about Te Tiriti o Waitangi, and how it has affected me growing up as a half-caste in Aotearoa. I was raised in a dominant culture that had me thrown into youth prison as a 10-year-old boy for a minor indiscretion by a racist white policeman Constable Carr. After borstal, which was 80% Maori, 19% Polynesian and 1% Pakeha, I went through foster care. It was there that I was exposed to solvent, drug and sexual abuse. I was a brown statistic; I have been finding my way back ever since. I can now proudly say that I have beaten addiction. I am engaged to a strong, beautiful wahine. I have the love of my children. I have a great job, and I am studying. I am grateful for my musical abilities and the gifts passed down to me. I love my life!

Mauri new album release
Mauri  is the highly-anticipated second album from singer-songwriter, lead guitarist Riqi Harawira. Passion is the fire that lights the way with Riqi embracing the importance and uniqueness of both his Maori and Pakeha roots and the gravity of restoring his Mauri in this adventurous odyssey of music. Riqis sound is Maori fusion. Upbeat, bilingual, reggae and rock music. A blend of Maori indigineous instruments and Maori weaponary. His kaupapa is about bringing positive change to negative Maori statistics through his music, embracing unity and understanding between all cultures. With the support of Waatea Music, Riqi is now able to share his journey through his music. The album Mauri is available on Spotify , Apple music and iTunes  Jan 17th 2019.  Kia ora the first single/video is out now Dec 14th 2018,  followed by Wairua Tuturu Jan 17th 2019. Riqis partner Flossie Drake works as an advocate for Safe menSafe womanSafe families and the Its not OK campaign MASsive (men against sexual violence). This is a frontline approach, working with victims of domestic and sexual violence in our communities. As part of the Safe Men, Safe Women, Safe Families approach our mission is to encourage Victims and abusers to start the healing process with the support of others who have made the choice to live Violence free lives. First step to healing is 'Uncover,Discover, Recover'. We run community programs and have advocates on call 24/7. SMSWSF is a non profit, private organisation. WE interact and work with It,s not OK anti violence campaign,Womens refuge, MASsive, CYFS /Oranga Tamariki, WINZ White Ribbon and many other Government and NonGovernment agencies.  Both Riqi and Floss combine their creative lives and their personl experiences surviving violence and abuse by working together on many positive community driven projects. The Kaupapa is always about the people and positive change we can create in or communities. New video Kia ora https://youtu.be/-neEjlj1XRs more
PHOTOS 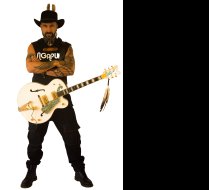 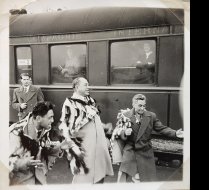 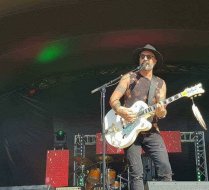 Living the dream
See all photos (11)
Follow
Send Message
About
Riqi Harawira is a lot of things. A Guitarist, a Counselor, a Storyteller, an Addict, a Teacher, a Survivor and a Warrior.

He is both Maori and Pakeha, he is a New Zealander who is proud of all that he is and of his nation. Riqi strives to be a unifying force through his teaching and his music. He wields his guitar like a taiaha (Guitaiaha) and melds Rock, Funk and Reggae as he... more
Influence
Polynesian
Polynesian
Polynesian
Genre
rock world music, maori fusion. high energy rock and reggae fused with indigenous music from the south pacific.
Other Pages