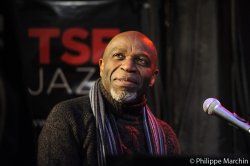 France
Tracks
Videos
Photos
Blog
About
ABOUT
Ray Lema was born in the former Kingdom of Kongo, in the west of the today called Democratic Republic of Congo. At age of 11 he entered the minor seminary of the White Fathers. He wanted to become a priest. Fate decided otherwise. As soon as they arrived at the seminary the children had to go thourgh aptitude tests, the Fathers quickly noticed the natural dispositions of young Lema for music and a Belgian father decided to initiate him to the organ and the piano. His seminary studies therefore were accompanied by Gregorian chants, Mozart and Chopin. He served mass for several years on an old organ “where he was pedaling hard.”

He was 14 when the Belgian Congo became independent and came back to be just the “Congo” of Patrice Lumumba, then the “Zaire” of Mobutu. He left the seminary and later joined the University of Kinshasa, where he studied chemistry.

The pianos were quite impossible to find in Zaire, so he learned to play the guitar and discovered the Beatles, Hendrix, Django Reinhard and the American Jazzmen. He left the University to be the guitar player of a famous band in Kinshasa, led by the singer Gerard Kazembe. He then discovered the nights of Kinshasa and met the Stars of Congolese music which at the time made whole Africa dance (Tabu Ley Rochereau, Kabassele …).

In 1974, Ray Lema was appointed Music Director of the National Ballet of Zaire with the mission to recruit and manage the traditional musicians who were to accompany the dancers of the National Ballet, representatives of the diversity and richness of the country. This experience changed his life and his vision of music forever. He traveled the country in all directions, from the Rainforest to Kivu, from Bas Congo to Katanga through the Kasai regions in search of the Masters of Congo traditional music. He discovered the science and magic of traditional rhythmic wheels and turned himself into a Master Drum.

After a deep disagreement with the Presidence of Mobutu, in 1979 he left for the USA invited by the Rockefeller Foundation . He only went back 32 years later to the today called “Democratic Republic of Congo”.

His departure for the United States also marks the beginning of a brilliant international career. He finally settled in France in 1982, where he has since resided.

Curious of all musics, precursor and always ready for all mucial experiment, Ray Lema became famous in the mid-80s in the World Music who was by the time discoverering the African Musics. He participated to various collaborations which enriched his compositions and his musical universe: from Stewart Copeland (ex-drummer of Police) to the Bulgarian Voices, through the Tyour Gnawa from Essaouira (Morroco), the Chamber of Orchestra Sundsvall in Sweden, or with Brazilian singer and composer Chico César and more recently as soloist guest with the Jazz Sinfonica Orchestra from São Paulo.

This relentless pursuit to meet “the Other” gives Ray Lema a completely unclassifiable profile . He has published around twenty albums, all different one from each other, however, marked by a very personal musical language, witnesses of the musical encounters of this amazing traveler-musician and perpetual student as he likes to call himself.

He composes regularly for Theater and Movie trails and has received several awards for his entire career (including a Django d’Or).

Music education in Africa remains a priority and he frequently organizes workshops with young musicians and produces many artists of his continent.

On stage, Ray Lema gives concerts of piano solo, performs in Afro-jazz trio or quintet (see The Quintet of his latest album, “Very Special New VSNP-production – with Etienne Mbappe on bass, Irving Acao on sax, Nicoals Viccaro on drums and Sylvain Gontard on trumpet – released in January 2013), or with his big band the Saka Saka Orchestra, where the groove flirts with flamboyant afro-beat, blues and Kongo rock and sensitives ballads.

He is always open to new encounters and we’ll find him in this summer 2013 at the “Festival du Bout du Monde” together with the Symphony Orchestra of the University of Brest, or with his Quintet and a Brass Band for the “Festival d’ïle de France” at the automn, a new vocal trio (with Fredy Massamba and Ballou Canta) accompanied by the brazilian guitar player Rodrigo Viana at the end of 2013 and in 2014 he will present a totally new creation for the string quartet “Déséquilibres” from Marseille, led by violinist Agnes Pyka.

Follow
Send Message
About
Ray Lema was born in the former Kingdom of Kongo, in the west of the today called Democratic Republic of Congo. At age of 11 he entered the minor seminary of the White Fathers. He wanted to become a priest. Fate decided otherwise. As soon as they arrived at the seminary the children had to go thourgh aptitude tests, the Fathers quickly noticed the natural dispositions of young Lema for music an... more
Influence
African
Genre
african jazz from central africa
Other Pages