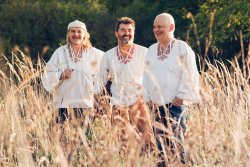 Their songs are unique mixture of urban folk, rock or bigbeat. They are all author compositions by the frontman. On the other hand, the band plays a lot of traditional folklore ethnic songs especially from north... more