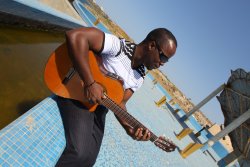 Senegal
Tracks
About
ABOUT
The phenomenal Liberian composer, arranger and singer rose from humble beginnings in Central Liberia, Bong County to become the acclaimed artist he now is.

Peter began his life under the loving parentage of Mr. & Mrs. Nagbe Barchue Cole in Gbarnga City . Mr. & Mrs. Cole were themselves natural musicians playing and singing in a local Methodist church where Peter himself grew up and was actively involved in the choir. This situation presented the perfect condition for the Cole family to ignite the innate artistic make-up of young Peter in whom music was already finding expressions. The passion and appreciation for music was finally accentuated when young Peter learned to play the guitar at age eight.

The humble beginnings of the Cole family was not an obstacle Peter could not overcome in his pursuit of a life of music, his strong aptitude and curiosity for knowledge were also driving forces in his every endeavor.

In 1983, Peter satisfied the scholarship criteria of the Christian Brother, a Roman Catholic Order, to school at the St Martin High School in Bong County . Peter maintained his scholastic standards and his scholarship until the civil crisis that began in 1989. Besides his excellence exhibited during music classes and his active participation in a junior band as an amateur guitarist, he was also a distinguished pupil amongst his peers. His academic prowess was felt specifically in Literature, Physics and Mathematics.

Peter was coerced by the war to school in Monrovia where upon merit he enrolled at the prestigious St Patrick's High School. This school was known for the zero tolerance it exercised against mediocre. Again, his phenomenal aptitude earned him the desired full recognition amongst his contemporaries. By then, he was already a recording artist while running a crash- music program, at the Catholic Mission in Matadi Estate, Monrovia .

At the climax of his academic sojourn at the St Patrick's High School July, 1993/1994-school year, he composed, arranged and sang the graduating class song at the Sacred Heart Cathedral. Shortly before Peter's graduation he became both a trainer and leader of the Don Bosco Beat Band where he taught young people the beauty of music as oppose to the ugly sounds of guns. His first recording at that time became a testament of this philosophy, “Stay Alive.” The album was titled ‘Be Awake.” Stay Alive today represent the title track of his most recent album.

The band was involved in advocacy -- calling for national dialogue on pertinent national issues. This background qualified the band for an ideal partnership with the International Committee of the Red Cross, ICRC on the Geneva Convention. February 2, 1996 an ICRC sponsored initiative brought together four acclaimed African musicians to Liberia . At the Catholic Mission in New Matadi Estate, Papa Wemba, Youssous N'Dour, and Labaja were in a live documentary concert with the Bosco Beat Band. The concert was a protest against the proliferation of civil wars in Africa and the world over. During the concert Senegalese super star, Youssous N'Dour became greatly thrilled by Peter's vocals and later promised to work with him. Today that promised has been fulfilled greatly as Peter is one of the principle musicians in Youssous' studio engaged into composition, arrangement and live playing.

In 2001, Peter contributed three songs to the United Nation High Commission for Refugee's, UNHCR Building Bridges CD and participated in the European tour that covered five countries in Europe France, England, Switzerland, Holland and Belgium which was to raise funds for the education of refugee children. This was one of the greatest moments in Peter's life where he finally had the chance to contribute something to refugees, since himself had been one.

Peter is an experienced musician and a multi-instrumentalist. He reads and writes music and plays the Guitar, Keyboard and Bass. He is an Arranger, Composer, lyricist and a great public speaker.

Peter is a Catholic. He lives with his beautiful daughter in Dakar , Senegal .

His dream is to work for humanity, through his music. He believes very strongly that music is the one universal language that transcends creed, color, race and ethnicity

Follow
Send Message
About
The phenomenal Liberian composer, arranger and singer rose from humble beginnings in Central Liberia, Bong County to become the acclaimed artist he now is.