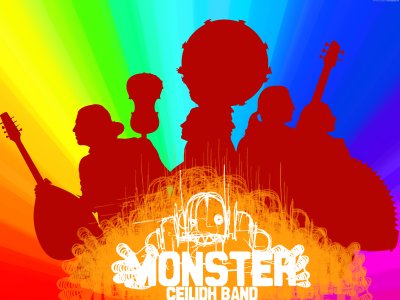 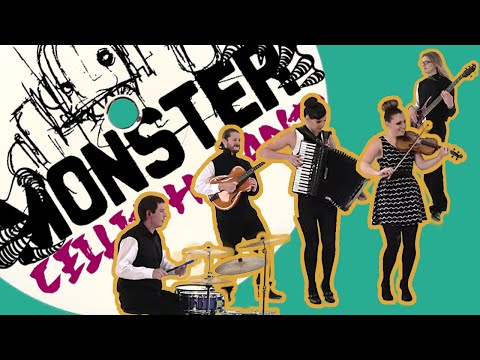 ABOUT
“At the heart of the Monster Ceilidh Band is the word ceilidh. The word derives from the old Irish céle, which simply means partner and originally referred to any social gathering. Most commonly these were a mixture of story and song, ballads, poetry and proverbs that find echoes in the veillée of Brittany, but also played an important role in courtship, giving a chance for the young folk of rural and island communities to meet and mingle. Unsurprisingly the celebratory and in particular dance elements of these events got the upper hand, to the point where the word ceilidh is now primarily associated with folk dancing. That definition certainly seems appropriate for the Monster Ceilidh Band, who are primed to get you moving, but stripping back the etymology, the root in the word partner is also on the money, as they use a bold and unique fusion of the folk tradition and modern electronic dance music to achieve it.

If a fusion of the folk tradition and drum & bass sounds an unlikely marriage, then you’ve probably not had the pleasure of listening to the Monster Ceilidh Band. They belong to the progressive movement in folk music for whom there are few boundaries. For their fusion to work, it goes without saying that the individuals of the band are exceptionally talented musicians. They share an innate understanding of the tradition and the origins of the band owe much to the folk music degree course at Newcastle University. They also share a willingness to push the boundaries of where that tradition can be taken and while retaining the timbral range of traditional instruments, the beats and rhythms take equal inspiration from club culture.” Simon Holland, Folk Radio UK

MONSTER CEILIDH BAND are redefining what ceilidh means by combining traditional dance forms with contemporary electronic dance music. Their powerful and uncompromising approach has brought them to the attention of many major Festivals like Cambridge and Bestival. They have been guided by bands like Shooglenifty, Martyn Bennet, and the Peatbog Faeries continuing in the fusion genre with their own take of Electronic fusion.D’nB producer the Touch works together with electronic composer and Bassist David de la haye to produce an electronic augmentation of compositions that Amy, Carly and Kieran write. The result is a crucible for smelting riffs, massive chord progressions, intense electronics, folk tunes and a wide variety of styles.

‘The energy is persistent, the performance uncompromising, the meld inimitable and if your feet remain still then someone has nailed your shoes to the floor.’Folkwords.com

The new electronic approach on their first studio album ‘Mechanical Monster’ transformed their reputation from a stalwart and steady ceilidh outfit into that of a ground-breaking new act on the UK music scene. On their latest album ‘Charge’ Drum ‘n’ Bass producer The Touch has stepped out from behind the laptop and joined the band on drums. Thissecond studio album which was released earlier this year continues to expand on their experimentation with electronic beats and to the bands delight already won an award and received positive reviews. MCB’s new line-up has led to many festival appearances across the UK from Cambridge Folk Festival to Bestival to Glade electronic dance Festival . ‘Charge!’ was released independently on the bands own label and was the first album to feature the full quintet with live percussion. Here are some thoughts from reviewers on Charge -

“…wit, depth, exuberance and an enthralling catchiness here which makes this hard to resist.”

“Joyously visceral, Charge is on of the most celebratory records I’ve heard in long time.”

“when the band come together musical magic happens…[MCB] hasthe juice to make even the likes of Lau look on in envy…Aaah, hell! It’s just impossible to resist!”