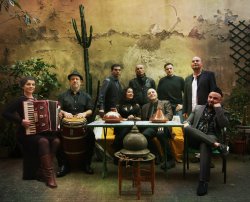 Italy
Tracks
Videos
Photos
Blog
About
Ti Nni Vai
by Milagro Acustico
Influence: Mediterranean , Middle Eastern
Genre: acoustic, world music, jazz, folk
share
repost
comment
buy
add to favorites
About "Ti Nni Vai"
Rosa del Sud is our tenth album since 1995, and is dedicated to the Sicilian singer Rosa Balistreri.
We wanted to follow a way bit 'different from the usual, to celebrate the great and unfortunate artist, we have in fact extrapolated her voice from old songs, almost all made with few resources, and we have inserted in original compositions that highlight its modernity and the poetic. Her voice, obviously did not need anything, expresses everything without a single instrument but it seemed important to contribute in our own way, alongside all those who work to the rediscovery of Rosa Balistreri, artists, associations and foundations in Sicily. In 2011 we dedicated the album "Sangu ru Poeta" to the great Sicilian poet Ignazio Buttitta, arousing so much interest that a publishing house in Sicily having to republish a book now out of print, exactly as happened with the Arab poets of Sicily to which we have devoted three CDs.

many Italian and foreign musicians have participated in the recording sessions as always we performed all the recordings in our studio and all the musicians are provided free to the realization of this project.


Milagro Acustico was born il 1995.Cultural Association started in 2007, after almost 12 years of activity in the homonym musical formation and, according to the statute, its main goal is to promote and spread the Mediterranean culture. The many CDs the group released in order to rouse the interest of the public opinion towards, the Arabic Poets of Sicily- to which it dedicated... more
Influence
Middle Eastern
Mediterranean
Asian
Genre
world mediterraneo, sicilian-arabic
Other Pages