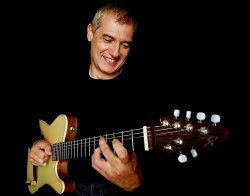 
See all tracks (2)
Follow
Send Message
About
Makis Ablianitis is an inspired composer and one of the most important guitar players in the world-jazz music scene. His relationship with music began at the age of 14 when he got his first guitar. He studied theory, harmony and counterpoint classes with Kostas Klavvas and composition, by attending seminary courses of Theodoros Antoniou and at the same time participated at the Center of Contemp... more
Influence
Mediterranean
Balkan
Middle Eastern
Genre
jazz, street beat, fusion, acoustic,
Other Pages