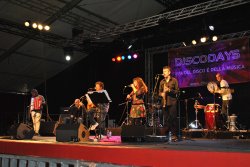 
See all tracks (11)
Follow
Send Message
About
Via Medina is a street of Naples (I) by the Port, a sort of borderline between the city and the Sea. it has always been like this, a meeting point of different cultures and people, since the first approach of seamen and travellers to the City. This crossroads, most probably, was at the same time a starting and departure point for music:new rhythms from across the Sea reached our remotest valle... more
Influence
West European
Mediterranean
Genre
folk, world, ethnic
Other Pages