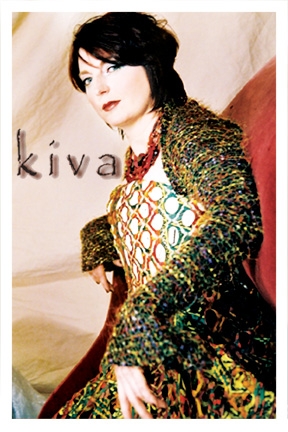 Meeting In Dreamtime
by Kiva Simova

The Incident
by Kiva Simova

+ 11 more
ABOUT
First off, listing only 3 ethnic influences is not enough. Add Balkan, Latin, North American, Caribbean, Tuvan, East Indian...all with the special spice of overtone singing (2 pitches from 1 voice). Kiva is known as a pioneer in this field, blending it with all the above genres. Her wide ranging chameleon-like voice goes from innocent to exotic, often in a single breath. Also a keyboardist, she has 3 solo CDs- The Ladder, Pulse, and The Quality of Light. She is frequently invited to sing improvised vocals with other artists, providing a 'shaman-esque edge' of textural soundscapes.

-only female foreigner invited to International Symposium of Throat Singing, Tuva, as performer and judge for competition featured in documentary 'Genghis Blues'

-invited as guest vocalist to Jennifer Berezan's 'A Song for all Beings' premiere in Berkeley, CA Nov 2013

-directed and composed for her own overtone choir 'Auralia' in Prague