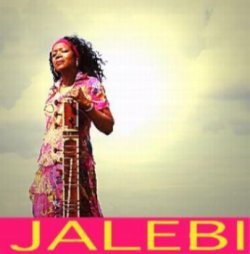 Italy
Tracks
Videos
Photos
Blog
About
ABOUT
All about JALEBI Music and its three founding band members!

Shirley Marie Bradby aka MiraBai Devi Dasi or simply MiraBai has been actively involved in the field of music since high school. After singing in various talent contests and winning she almost considered to make a career of singing but preferred to go to college instead to study Economics and Political Science.

While attending Macalester College in St. Paul, Minnesota she however she could not deny her passion for singing and was actively involved in the legendary Afro-American singing group “Sounds of Blackness” directed by Mr. Gary Hines who also accompanied her at the piano during the finals for the Miss Black Minnesota contest which she won…. again partly because of her singing talents. From that moment her interests in music and singing have never waned.

Although she does not play an instrument she considers her voice to be an instrument and tries constantly to improve and expand what she considers to be a God-given talent. Over the years she has had contacts with various artists such Richie Havens, Amii Stewart, Joe Cocker, Fred Bongusto, Claudio Rocchi, Zucchero Fornacari and Paolo Tofani from whom she learned many things and admires as individuals and as artists.

Shirley also feels that her musical quest can not and should not be divorced from her search for self-realization. Shirley has traveled to India to see and experience first hand the spirituality for which India is famous. Her experiences with Indian culture and music impressed her so much that she decided to combine traditional Indian music with gospel, soul and blues; a combination which she has discovered helps her to express her most inner feelings and thoughts.

JALEBI is her first experience as the lead singer and feels that her collaboration with the other members of JALEBI is an opportunity to develop her talents and to share her love for music and different cultures with those who like to listen to great music!

Ramananda Roy has always been interested in music even from a very early age. In fact his first musical experience was as a singer in a hardcore punk band! The first instrument that he learned to play was the drums and then he decided to try the bass, which became his favorite instrument. He was able to use his talent as a bass player after he became a member of a group called the Whyxyd Band when he was only fourteen years old. He made his first record album with the Whyxyd band which he still remembers with fondness.

Ramandana Roy was also a member of the RPCT; a band that played free music and that participated in various theater productions.

Due to his interests in various cultures and music Ramananda Roy has also learned to play the harmonium, the sarod, mrdanga, and the dhola. He is also expert in making handmade musical instruments.

His fascination with music and his attraction to different cultures he has caused him to travel extensively. In fact Ramananda Roy has used his trips to India, Europe and North Africa to increase his knowledge of different musical cultures. However, he does admit that India has always held a special fascination for him.

It is for this reason that Ramananda Roy travels to India at least once a year to update his musical skills and to see what is happening on the Indian musical scene.

Yasodanandana has always been attracted to different kinds of music. His interests range from Worldbeat, Ethnic /Ethno Jazz to Techno Trance.

He has been involved in organizing various musical groups and projects. One of his more successful projects, with his band Govinda, has made several Cds with the EMI record company and a Govinda song was also included in Giorgio Armani’ famous Cd compliation for Sony. Yasodanandana’s group Govinda has also been very successful in various countries such as the United States, Europe, and the Far East. Additionally, in Italy some of their songs have also been utilized in TV commercials.

Another one of Yasodanandana’s projects was the group called Kesava which at that time was experimenting with New Age music. They too had a discreet success, in fact in Hamburg, Germany they were included in a CD compilation produced by Innovative Communications .

Yasodananda, together with various groups including a recent project with Tatoo, is also active on the German live concert scene. He has also been involved with several projects with Italian artists such as the Mugnions (with Piero Pelù), Marco Masini , and Paolo Tofani (Area).

Yasodanandana plays various instruments but his favorite musical instrument is the guitar. His main aspiration is to perfect his research and experimentation with sound design using music from various cultures which he considers to be one of the most fascinating aspects of modern music and technology.

Follow
Send Message
About
All about JALEBI Music and its three founding band members!