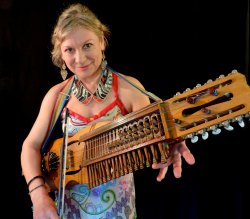 Her latest album 'Veer', a collaboration with Ricardo de Noronha, comes out in May 2017, exploring interplay between Nordic stringed instruments (Hardanger fiddle and nyckelharpa) and his hand-made flutes.

Her 2nd solo nyckelharpa album 'Radial' came out on Waulk Records on 1st October 2015. Inspiration for her repertoire is drawn from the folk traditions of northern Europe and beyond, including Swedish polskas, Irish & Scottish jig & reel sets, French dances, Moroccan Gnawa music and original compositions. She performs solo or as part of a duo accompanied by guitar.

Griselda Sanderson is one of six musical children of violin-maker Derick Sanderson who resided in Clackmannanshire, Central Scotland. Her first bandWaulk Elektrikwas formed with her brother Larry, also a fiddler. They toured extensively in the 1990s playing at festivals such as Cropredy, Towersey, Sidmouth and WOMAD. The band released four albums and started their own labelWaulk Recordsthat has continued to this day. ?After her brother Larry was seriously injured in a road accident she formed the trio Spyka with Mike Cosgrave and James Dumbelton (both of whom played in English folk singer Jackie Oates’ Band) based in the West Country. In 2010 she joined forces with Gambian riti player (a one-stringed West African fiddle) Juldeh Camara to form the groupJulaba Kunda, and in 2011 they released a collaborative albumTraderson the Waulk Records label that combined and contrasted their fiddle traditions from three thousand miles apart. Julaba Kunda were winners of World Music Network’s Battle of the Bands competition in 2012. She produced one album and played with Senegalese blues guitarist Amadou Diagne(Yakar, 2013)and has recorded and produced two albums for Moroccan Gnawa master Simo Lagnawi('Gnawa London' on Waulk Records 2013 and 'Gnawa Berber', Riverboat 2014) with whom she also performs live. In 2014 she composed music for English poet Alice Oswald for her performance piece 'Tithonus'. Her latest project has been to record a double album of traditional Scotttish, Scandinavian and other northern European music with members of her family including Orkney fiddler Sarah McFadyen, her brother 'cellist Joel sanderson, guitarist & banjo player Louis Bingham, Frey Rae on flute and whistle and Luke Jones on 12-string due for release in 2015.