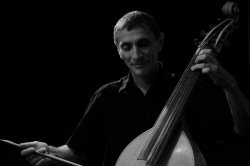 Germany
Tracks
Videos
Photos
Blog
About
ABOUT
OPEN-MINDED MUSIC (not only) for OPEN-MINDED PEOPLE.

using all technical possibilities across all contemporary music genres.

"Oriental sounds reflect in space, nest in the ears, delight the senses. Heard alongside the Indian vocalist, the viola da gamba radiates exoticism: like the lute, it has its ancient roots in the Near East, was for centuries one of the most popular instruments across Europe, and has made a comeback with the recent popularity of Baroque music.

He and his new album „The Missing Link“ mix Oriental and European sounds, sometimes with subtle elements of rock, then moving on to more chamber- and jazz-oriented sounds."

Apart from western culture (Bach, Satie, Ravel, Monk to Hendrix and Frank Zappa), his musical sources are european (from Irland to the Balkans through Andalousia), and arabian, indian and african. Some say “worldmusic”... yes, coming from Lorraine...

After nearly 15 years of blues/rock/jazz guitar and bass, changed to the viola da gamba in 1993. Took some years to (re-)gain the same level as the guitar. The instrument changed his vision of music completely. Though he does like some of the baroque music for the viol, this music is not his world and he wants to show all the facettes of this wonderful instrument in all sorts of other musical contexts. Plays a lot with oriental musicians (Persian, Indian, Arabian).

2019 - CD "The Wind Cries Satie" with 11 further arrangements of Erik Satie´s music, 7 Gnossiennes, 3 Gymnopédies + 1 extra will be released beginning of 2019

Music comes from the muses, not the museums !

Follow
Send Message
About
OPEN-MINDED MUSIC (not only) for OPEN-MINDED PEOPLE.