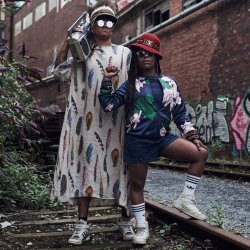 Germany
Tracks
Videos
Photos
About
ABOUT
Their masked mystique is the music – a tropical bass thunderstorm of candy rain and sound clouds. Gato Preto – the producer Lee Bass and rapper/singer Gata Misteriosa – unveil the African music paradise reflecting their roots in the polyrhythm of Bass from Ghana, the Portuguese slang of Gatas Mozambique and live, with the incredible Djembe Power of Moussa Diallo from Senegal.

Unique is what they are live: afrofuturistic outfits combined with Gata jumping the stage, Lee kicking the beats & synthies and Moussa hitting the Djembe live. This pan-african Act has been invited to Africa several times! They played at the African Futures Festival in Johannesburg and in 2016 Gato Preto headlined the Nyenge Nyege Festival in Uganda.

2017 is filling up with many dates in Africa – In April GP is going to Cape Verde, September they go on a East Africa Tour and end of 2017 Senegal & Ghana are on there shedule too.

Gato Preto are part of the international afro-futuristic scene where they travel around the globe. Collaborations with many international artists like Aero Manyelo, Edu K, Daniel Haaksman, KD Soundsystem, Mc Zulu and many more are in the making...

Their Album „Tempo“ will be released in Febuary 2017 on Gato Preto´s own label OhWow!Records with worldwide digital and physical distribution.