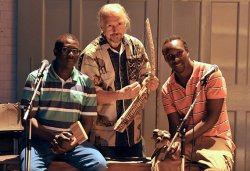 The soundtrack was created by Ganda Boys founder member,Craig Pruess, and four songs by the Ganda Boys were featured as part of the story and drama... more