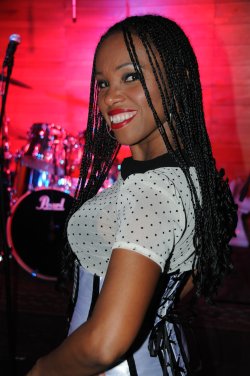 Israel
Tracks
Videos
Photos
About
ABOUT


Bio Elisete Elisete – the Israeli-Brazilian Singer, composer and song writer, released her first album 'Luar e Cafe' (Moonlight & Coffee) in April 2004 and the second album 'Gaagua' (Longing) in March 2006. Her album 'Elisete- Remixes' was released in 2007 and it has songs from her previous acoustic album in remix versions. Her new acoustic album 'Minhas cores' (My colors) will be released this year.

Elisete is an independent artist who believes that talent, optimism and a lot of hard work will take her to the place where she wants to be.

The new CD was recorded half in Israel and half in Brazil. Half of the songs are in Hebrew and half in Portuguese. The album reflects Elisete the way she feels: half Israeli and half Brazilian.

The new album is acoustic and still very up to date, lyric, a bit of melancholic maybe, romantic and sensual.

The album was produced by Israeli-Brazilian producer Avi Levin together with Elisete, Roni Ben-Ezra and Ron Laor as co-producers. They were very involved in all the production and arrangements of the songs.

Three singles from the album were released so far to the radio stations: Kvar lo carnaval (It's not Carnaval anymore), Fantasia (Fantasy) and Yam (Ocean). 'Gaagua' (Longing) - The second album The album resembles Elisete: An almost impossible mix of simple words that touch deep in your soul with Brazilian rhythms and melodies that just make you dance. In Gaagua Elisete goes beyond song and lyrics writing and singing and she is actively involved in all the production stages including the arrangements.

This album was dedicated to the late Israeli composer Ehud Manor.

The music site QUBE gave 'Gaagua' the third place in the list of the best Israeli CDs for 2006.

The song 'Shalom Dikaon' (Goodbye depression) was included in a compilation that was released in Germany. All the profits from the CD were dedicated to the building of a new hospital that specializes in spinal disorders in Africa. 'Luar e Cafe' (Moon light & coffee) - The first album This album is the summary of a year of intensive work trying to portrait through music her life in Israel and in Brazil. The album was received with enthusiasm and got excellent reviews. The songs are played in numerous radio stations and video clips of various songs were shown in the Israeli music channel (Channel 24) and throughout the Internet.

'Luar e café' – The theme song from the album entered a compilation disc released in China and Taiwan. The song 'Capoeira' got many remix versions and one of them was released in a compilation album in France.

This Cd has songs from the acoustic albums that Elisete has released before: 'Luar e café' and 'Gaagua' in remix versions.

The electronic music field is not new to Elisete and we can find touches of it in previous Cd's. The album was created with collaboration of leading producers of Electronic music that liked her music and wanted to participate in the project.

The shows Elisete tours Israel with her band in a unique show sweeping the audiences of their feet. In her show Elisete blends her original Hebrew songs with the Brazilian classics in Portuguese. The band comprises 6 talented musicians that also contribute from their talent to the musical arrangements.

In the end of 2009 and beginning of 2010 Elisete went on a tour to Italy and a tour to Ukraine and in both tours she gave shows and lecture about Israel with great feedback from her audience.

In addition to her own show Elisete performs with Jazz pianist Roni Tzur in a Brazilian Jazz show, she collaborates with International DJ's and electronic music producers in mutual projects and she initiates other projects. Elisete also collaborates with other Israeli artists from different fields of music: Idan Raichel in his new project, Daniel Zilbershtein, Bezalel Aloni, Offer Nissim and others

Elisete collaborates with artists abroad as well: Hector Contreras from the U.S, Mark Holiday from England, Marco Malinverno from Switzerland, Eddie Valdez from Brazil and others…

The label Selecta Beats from Belgium released ten of her tracks of electronic music last year, including her song 'Black is beautiful'.

The story in short Elisete was born in Brazil and came to Israel in 1991 directly to the Gulf war that was the background for the period when she acquired her Hebrew. Her life story is a long Saga with optimistic conclusions. Elisete says she sings to bring joy to the people in general. Cynics reading this declaration will laugh. Cynics hearing her say it will be engulfed by her magic and believe it. With this drive and with her energy and joy Elisete sings about life in the most Israeli perspective and also the most Brazilian one. The lines of Elisete have warmth, simplicity and a lot of love. Her voice and rhythm take us to her unique Brazil that is always in her heart.

Elisete speaks 6 languages and now she is learning 2 more: Russian and German!

For more information about Elisete: www.elisete.com