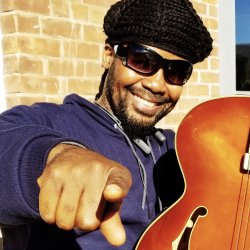 Ghana
Tracks
Videos
Photos
About
ABOUT
Leader, Guitarist/Composer Constant Boty is one of the most innovative and rising voices in the West African jazz scene today. He created The Guru Guru Project as a trio in late 2010 in Accra, Ghana while rehearsing original material at home with local musicians.

During that time, Boty was trying to redefine his Afro-pop sound influenced by musicians like Youssou N’dour, Salif Keita, Habib Koite, and Ali Farka Toure, with added elements of jazz idioms and European classical stylings. On top of that, Boty fuels the mix with some of the more sophisticated, 80’s rock and Jazz fusion music by groups such as The Police, Genesis, Pink Floyd, Weather Report, Yellowjackets to name a few…

Boty studied classical guitar, modern guitar and musicology in Ivory Coast at the National Institute of Art (Institut Nationale Superieure des Arts et d’Actions Culturelles (I.N.S.A.A.C) where Benin Guitar Legend Lionel Loueke also studied several years ago. Boty is a Guro, which is a tribal group of Ivory Coast, West Africa, also known among the most prolific of African artists. ''I spent many years studying our music, and I came to like my Guro people’s concept of the Hyena which we call Guru Guru, its nickname'' said Boty. He further explains that the hyena is known for its daring attitude of breaking common rules and sometimes is among one of the only animals in the savannah to confront the king lion.

This is the same idea that Boty has for his music and for his Guru Guru Project, as they explore the possibilities beyond the common jazz idioms and classical harmony rules, and interlace their own exotic brand with a sprinkle of West African polyrhythmic ideas, transcending the usual blend of jazz/world fusion popular on the music scene today.

Their music is indefinable yet highly recognizable, intersecting lyrical Jazz and rock guitar, groovy polyrhythmic exploration, and onomatopoeia, sometimes mining the voice of animals and indigenous people in the West African forests and savannah. With the Guru Guru Project, Boty combines the talents of fearless, young bassist and vocalist, Steven Arthur, drummer Fred Awuku and sometimes a pianist or saxophonist, helping to re-draw and extend the boundaries of Afro-pop to jazz.

The band’s debut album release last year in September, 2015 with Boty’s own label Mevicon Music, was produced by Constant Boty himself and his long time friend from Madagascar, Aina Ramambasoa.

Follow
Send Message
About
Leader, Guitarist/Composer Constant Boty is one of the most innovative and rising voices in the West African jazz scene today. He created The Guru Guru Project as a trio in late 2010 in Accra, Ghana while rehearsing original material at home with local musicians.