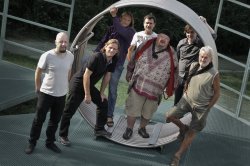 Czech Republic
Tracks
Videos
Photos
Blog
About
ABOUT
No. 10 in the World music charts Europe in December 2011, performance at Rainforest world music festival and SzigeT festival (world music stage).Original ethnic fusion filled with wild rhythms which literally leaves your head spinning. Spiced with rock roots and based on the legend of the fictitious one-legged Čanki nation.This music bursting with mazing energy is 100 % live!

Czech band Čankišou became famous in the Czech Republic and also abroad for its concerts full of energy and wild rhythms. Concerts run by singer Karel Herman who is very impressive not only because of his voice but also his figure become wild dance parties few minutes after beginning. Čankišou mixes influences from various ethnics with rock roots and with its rich collection of exotic instruments travels the world from Réunion island in an Indian ocean to Pakistan.

Čankišou was established at a Christmas party in 1998 by rock musicians. They put together various exotic and rock instruments and started to explore world music field which was completely new for them at that time. Čankišou music is based on the old legend of the fictitious one-legged Čanki nation. The band also learnt their language which is understandable all over the world. Within 17 years of existence the band has become one of the top world music bands in the Czech Republic and has travelled 18 countries so far. Čankišou was one of the bands performing at the first Czech showcase festival called Czech music Crossroads 2014.

Čankišou published several successful CD´s: first CD called Music of the Canki people (Hudba lidu Čanki, 2000) is full of energy and passion from new meeting with world music. More thoughtful Densé ju (2002)includes tittle Mongolian folk song, which was brought by singer Karel Herman from a festival in Mongolia. Third Gamagaj (2004) is inspired by a book Baudolino by Umberto Eco (all by FT Records). The forth CD Lé La (2008 by Indies Scope Records) is inspired mainly by many journeys and fusions with local musicians the band did in the previous two years. Sain Zahoor (BBC World music 2006 winner) appears as a guest in a song and video called Zuha. According to the Czech world music journalist Jiri Moravcik Lé La is the best Czech world music CD in 2008. The band was nominated for Czech version of Grammy called Andel 2008 in world music category. CD Faÿt(2011, Indies Scope) which reflects more rock roots of all the musicians was No. 10 in the World music charts Europe in December 2011, No. 12 in January 2012 and No. 17 in November 2011. In the top 200 WMCE in 2011 as a whole Faÿt is No. 98 out of 899 moninated CD´s. The band got nomination for Andel 2011 in world music category for CD Faÿt. The new Supay CD (2015, Indies Scope) iswhere the distinctive rock rhythms are perfumed with exotic world adventure.

Jiří Moravčík on the CD Supay:“On their new CD, the Czech world music band Čankišou have found a perfect remedy for the demons that feed on human evil and hatred. By their healing dance trance music they offer us protection against them in the name of the Inca god of death Supay and based on advice from a very wise shaman. We don’t have to understand the lyrics to grasp that wild dance killers Čankišou sound crazier than ever before.”

You can buy our music here.

Follow
Send Message
About
No. 10 in the World music charts Europe in December 2011, performance at Rainforest world music festival and SzigeT festival (world music stage).Original ethnic fusion filled with wild rhythms which literally leaves your head spinning. Spiced with rock roots and based on the legend of the fictitious one-legged Čanki nation.This music bursting with mazing energy is 100 % live!