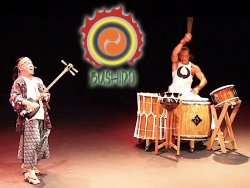 Canada
Tracks
Videos
About
ABOUT
Bushido/節童 is a duo of musicians who promote music learning joy through traditional Japanese instruments. Within all cultures is the love of music. Through their passion of sharing their traditional musical instruments, they foster a deeper appreciation of the music through experiencing authentic Japan traditional instruments such as Taiko, Shakuhachi, Shinobue, Tsugaru Shamisen and show how closely related we are despite our seeming differences. We are all connected by Nature and within us, all is the spark of creativity and inspiration that tells us “We are Music!

Alcvin was born in Japan and spent many years studying shakuhachi bamboo flute in Japan and eventually attaining his Shihan licenses from some of greatest players in Japan. He also studies Tsugaru Shamisen from several major players in and out of Japan. Alcvin has shared the stage with many distinguished musicians such as John Mclaughin, Bill Laswell, Hun Hurr Tu, Celso Machado, Kiyoshi Nagata, and Nagata Shachu, Joseph “Pepe” Danza, Eien Hunter-Ishikawa, The Vancouver Symphonietta, Uzume Taiko, and the Dreamtime Contiuum. He has also performed at the Vancouver Jazz Festival, Vancouver Sacred Music Festivals, The World Sacred Music Festival in Japan, and founded the Vancouver Shakuhachi Festival and Bamboo-In Shakuhachi Retreat Centre.

Nori is an internationally renowned percussionist with an emphasis on Japanese Taiko and African Djembe drumming. He has toured extensively with the New Asian Ensemble ‘Tenga/天河’ from Japan and has performed at numerous festivals such as the Fuji Rock Festival in Niigata, Rhythm of the Forest in India, and the International Children's Festival in Seattle. A long-time member of Midnight Taiko in Calgary, AB, Nori is now a freelance collaborative musician based out of North Vancouver, BC.