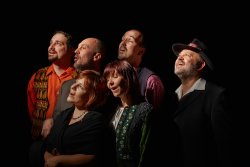 Slovakia
Tracks
Videos
About
Kamaráti / Friends
by BANDA
Influence: East European , Balkan
Genre: slovak-balkan fusion
share
repost
comment
add to favorites
About "Kamaráti / Friends"
This song comes from Poluvsie in northern Nitra region. It is one of our oldest songs and we
composed it even before we were a band. The boys chose the Balkan rhythm spontaneously
for the jest of it. And that was probably the moment Banda was conceived.

You, friends
You don’t know what’s new
And I’ll tell you
They are recruiting in Prievidza
Beating on two drums
That’s what I’ll tell you

Exercising
Come, my dear and have a look
Beck on me with just your finger
You won’t have to call to me

The band plays traditional folk songs in contemporary arrangement. The members are renowned folk musicians with long-time experience in folk music and other genres.