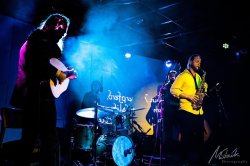 Much of Atlas Maior’s original material is grounded in the past and the present, melodies built from the shades of past experiences or inspired by ground shaking current events around the world. Atlas Maior released the Atlas Maior EP in February 2011, and has spent the last two years creating original material, performing throughout Central Texas and East Texas, and engaging creatively with other Austin-based musicians. The group’s full-length LP album, recorded in Mohr Music Studios during Summer 2012, is due for release in late Fall 2012. Atlas Maior’s engagement with musical traditions from geographic locations worldwide speaks to one of the group’s primary messages: You can’t sense culture from a map – just shapes, lines, symbols and words, textures and colors. Music, however, uses all of these tools, in sound, to begin to reveal the real territory of human emotion and design, hidden within the map.