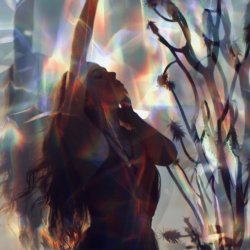 United States
Tracks
Videos
About
Angelfire
by Ariana Saraha & Flight Behavior
Influence: West European
Genre: ethereal, world, world music
share
repost
comment
buy
add to favorites
About "Angelfire"
Black waves of night pour through me
Stars of the ocean, tumbling sky
Wash away all that was mine
But I, oh I, I don't mind...

And I sent a prayer that flew to the sky
Touched the stars, and fell to my eyes
Showering, shimmering petals of light
And I, oh I, I am pure delight...

And I watch as the embers fade to grey
And I close my eyes and a light takes shape
Only a spark, a touch of grace
Then a star, my heart aflame
Oh, AngelFire!