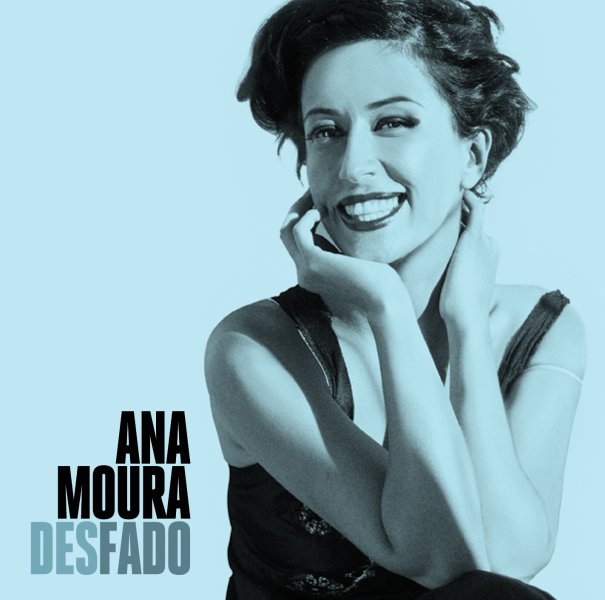 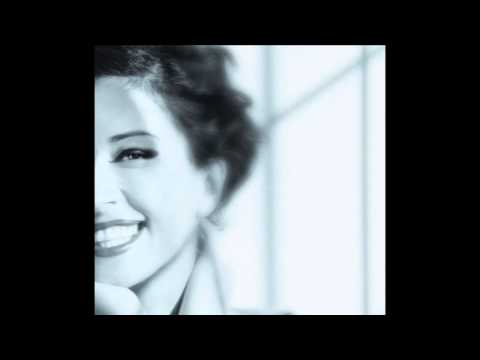 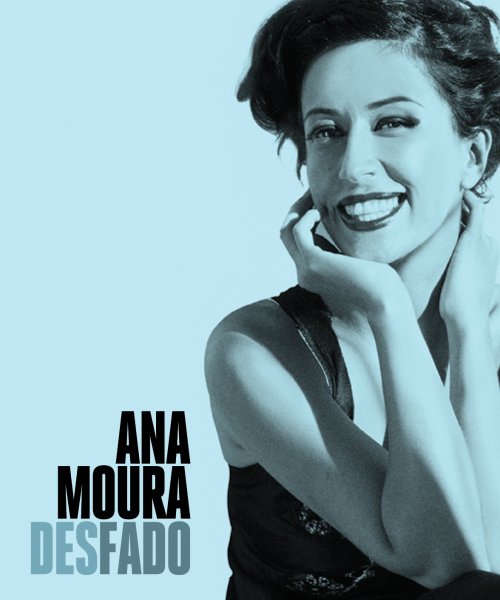 There is no other voice in Fado quite like Ana Moura. Her voice strolls freely through tradition but flirts elegantly with pop music, broadening the spectrum of Fado, so typical of Lisbon, in a very personal way. But what sets her apart is not only the low-pitched and sensual tone, so unique – Ana Moura instantaneously transforms any melody to which?she lends her voice, into Fado. It’s an immediate spark, an emotional explosion aimed ruthlessly to the listener’s heart.

Fausto, José Afonso, Ruy Mingas, music from Angola?and Fado; those were the melodies that were sung in the evenings of the Moura family in Coruche, when Ana Moura was but a little girl. She was born in another city of Ribatejo Province, Santarém, in 1979 – and yet was already very fond of music. Both parents sang, all her family on her mother’s side sang and any family meeting would end with a singing match. Though they sang a bit of everything, Ana started feeling that, for some reason, she had a special fondness for Fado. At age six she would sing her first Fado,Cavalo Ruçoand hear her mother hummingO Xaile da Minha Mãe.When she became a teenager, Fado was left aside. She became interested in other genres more in line with her age and preferences of her friends from high school.

It is with that curiosity for other types of music, in those teenage years - a time of discovery and rebellion - that Ana Moura arrived in Carcavelos, in the outskirts of Lisbon, aged 14, to finish high school. She came not to sing but to study, enrolling in Academia dos Amadores de Música. Here, she formed her first band with some school friends. Although she would sing other genres, Ana’s voice rapidly gained a natural Fado tone to it. Even with a rock band, she managed to include a Fado or two in her repertoire – usuallyPovo que Lavas no Rioby Amália, who was by then her main influence as a singer.

Her experience with the cover band, Sexto Sentido ended up leading to the production of a pop/rock album with musician Luís Oliveira by a Universal label. But the album was never finished. Destiny then played a role, taking Ana Moura to a bar in Carcavelos where she let herself go and sang a Fado. In the audience was guitar player António Parreira who, quite impressed, took her by the hand and introduced her to several Fado houses. Then, at a Christmas party for musicians and Fado singers, Ana Moura met the very people who would populate her nights from then on, and she was invited to sing. This time, it is Maria da Fé, co-owner of the prestigious Fado house, Senhor Vinho, who is taken by her raw talent. Besides cheering her, Maria da Fé also invited her to sing at her Fado house.

It is indeed that nightlife in Senhor Vinho and other Fado houses that her singing matured. Previously, Ana Moura would sing Fado because of the natural trail of her voice, following her intuition. Now, after the advice of the more experienced – mainly Maria da Fé and Jorge Fernando – she has been given other reasons to sing, without killing her spontaneity.

That passion reveals itself in such a way that quickly took the attention of journalist Miguel Esteves Cardoso. Before her name was known by the record labels, it had been the journalism of Esteves Cardoso that amplified the talent of the new Fado singer after he saw her in a TV show calledFados de Portugal.It was after reading his inflamed article inIndependentethat Tozé Brito, General Manager of Universal went to Senhor Vinho to witness the voice he knew only from Sexto Sentido. It didn’t take long before Tozé invited her to record her first album.

Jorge Fernando was invited to produce her debut album,Guarda-me a Vida na Mão(2003). Alongside the artistic direction, the musician was also responsible for six out of fifteen songs in the album, one of which was taken by Ana as her signature theme –Sou do Fado, Sou Fadista(I Belong to Fado, I am a Fado singer). The collaboration between the two extended to the follow-up albums. From the beginning, it was clear that Ana Moura’s Fado had a rare wide range, featuring people like Ciganos d’Ouro and Pedro Jóia, and instruments like cajon and Flamenco guitar. But the essence remains untouched: tradition is of key importance. The reaction of the public and critics toGuarda-me a Vida na Mãowas unanimously enthusiastic. Ana Moura became an immediate feature in Portuguese concerts and, in time, also abroad.

Aconteceu,in 2004, was the logical sequence to her debut album. Being a double record it revealed the singer’s extraordinary ambition and showed the amazing sureness on her chosen path: the natural marriage between the more traditional Fado and a very personal way of giving it an air of contemporaneity.

Ana Moura’s career began to gain such momentum that? she abandoned Senhor Vinho, in order to accommodate the invitations to sing abroad. She later joined the regular cast of another Fado house, Casa de Linhares – Bacalhau de Molho. Her success abroad took her to perform at the prestigious Carnegie Hall in New York in February of 2005.

Meanwhile, on the other side of the world, Tim Ries, The Rolling Stones sax player entered Tower Records in Tokyo, looking for Fado albums. His idea was to include a Fado singer in the second record of his Rolling Stones Project, inviting musicians of other genres to play some of the band’s themes with himself. He bought three CDs at random selection, guided only by his instinct, and it was love at first hearing. For the project, Ana sangBrown SugarandNo Expectations.She later performedNo Expectationslive with the Stones at the Alvalade XXI stadium. On several occasions, the tours of Ana Moura and The Rolling Stones met. In one of these occasions in San Francisco, Ries called Ana Moura and showed her a song he composed with her voice in mind.Velho Anjowould then be included in her next album,Para Além da Saudade(2005) after being given a more Fado approach by Jorge Fernando.

One of the special features ofPara Além da Saudadewas?the rare participation of the musician Fausto in an album?by another artist. Ana, having growing up listening to the performers’ famous song,Por Este Rio Acima,summoned?up the courage to ask him to compose a new theme for her. Another special guest, composing specially for herself, was Amélia Muge. The mixture of cultures was present in the form of a duet with famous Spanish singer Patxi Andión. Tim Ries, besides authoring of one of the songs, also played the sax in two tracks –Velho AnjoandA Sós com a Noite.

Thanks to the songOs Búziosby Jorge Fernando, the success ofPara Além da Saudadereached new levels in Ana Moura’s career and eventually led to the privilege of singing in the two main venues in Portugal, the Lisbon and Oporto Coliseums. The album also won the Amália Rodrigues award.

After the huge success ofPara Além da Saudade– which spent 70 weeks at the top when the fourth albumLeva-me aos Fados(2009) was released, quickly reaching platinum status. As usual, it was produced by Jorge Fernando with lyrics by Tozé Brito, Manuela de Freitas, Mário Rainho and Nuno Miguel Guedes, as well as an original by José Mário Branco. The album has also another composition by Amélia Muge.Não é um Fado Normal(It’s Not a Regular Fado), features Gaiteiros de Lisboa and confirmed the singer’s unique path, expressed in the title itself.

In May 2009, after a phone conversation, Prince flew especially to Paris to witness Ana Moura’s charming performance at La Cigale. On July 18, 2010, Ana Moura once again took Fado to?a great pop/rock concert, singing with Prince on the encore of his show at the Super Bock Super Rock festival. Together, they performed a Portuguese version ofWalk in Sandand the traditional FadoVou Dar de Beber à Dor.

In September 2010, Ana Moura accepted the invitation?of Frankfurt Radio Bigband to sing in two concerts in the German city. In April 2011, she once again sang with the jazz orchestra in her return to the Lisbon and Oporto coliseums. For Ana Moura, it was the celebration of the year that saw her victory at the Portuguese Golden Globe awards, her ascension to the top of Billboard and Amazon, and the nomination of “Artist of the Year” in the English magazineSonglines.Some months later, in August, she sang at the Back2Back festival in Rio de Janeiro, together with Gilberto Gil, performingFado Tropicalby Chico Buarque.

Introducing her fifth albumDesfado,in 2012, Ana Moura prepared a revolution in her music, summoning special international guest star – the legendary jazzman Herbie Hancock to her side. In 2007 Hancock dedicated an album to Joni Mitchell,River: The Joni Letters.The album – co-produced by Larry Klein (the singer’s close partner and ex-husband, alongside which he became famous) - won a Grammy award for Best Album of the Year. It was the same Larry Klein who producedDesfadoat the Henson Recording Studio in Los Angeles. It was Klein who brought in musician Herbie Hancock – who played in the Miles Davis’ quintet back in the sixties and left his distinct imprint in jazz music the following decade with his hot electric pianos and funk swing. Hancock lent the sound of his Fender Rhodes toDream of Fire– a composition written by Ana Moura and an American undisclosed friend – as one of the English songs included inDesfado.Ana also covers the Joni Mitchell trackA Case Of You’.

Desfadoderives its name from one of the two themes composed to Ana Moura by Pedro da Silva Martins,?from the band Deolinda. The main purpose was to sing songs composed especially for her by people of her own generation but outsiders to Fado: Virgem Suta, Miguel Araújo, Luísa Sobral, Pedro Abrunhosa and Manuel Cruz are some of the participants. The first single,Até ao Verão,was written by Márcia. Here, Ana Moura remarkably resembles Lhasa de Sela. It’s no surprise that the album is being presented as a turning point in the singer’s career, denoting her pop influence.

It was produced for an international market, as well as appealing to a new Portuguese audience. Alongside the Fado regulars, Ana Moura included a song by António Zambujo, lyrics by Aldina Duarte, Manuela de Freitas and Mário Rainho. As for the musicians, Ana Moura kept the Fado reference – Portuguese guitar by Ângelo Freire and Fado viola by Pedro Soare. She also included the collaboration of double bass David Piltch (Bob Dylan, k.d.lang), guitar player Dean Parks (Marvin Gaye, Stevie Wonder), percussionist Jay Bellerose (Aimee Man, Ani DiFranco), keyboarder Patrick Warren (Fiona Apple, Bruce Springsteen), violinist Freddy Koella (Lhasa, Carla Bruni) and the quintessential saxophonist Tim Ries,?the man who introduced her to Rolling Stones and led her to singNo ExpectationsandBrown Sugar.Ana introduced some of the tracks fromDesfadoon her tour which began in Mexico October 2012. In Portugal, the first presentation was on November 16th in Leiria, followed by Portimão, Faro, Torres Vedras, Tróia, Torres Novas and Fafe. Her last concert in 2012 was in Belgrade, Serbia.

She began 2013 with performances in Portugal, including the sold-out presentations at the prestigious venues Coliseu dos Recreios, in Lisbon, and Coliseu do Porto, in Oporto. Besides the concerts already booked for Portugal Ana Moura will also perform in Switzerland, Germany, France, Spain, USA, Canada, UK, Netherlands, Belgium, among others.