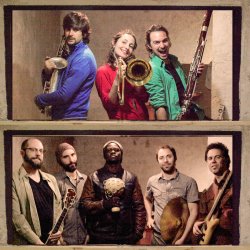 
See all tracks (5)
Follow
Send Message
About
Alma Afrobeat Ensemble was started in Chicago in 2003 and then moved to Barcelona in search of a more authentic, worldly sound. That is exactly what was found, and in 2010 the Alma released the album “Toubab Soul”, and in 2011 the album of remixes, “Toubab Resouled”. They are currently preparing to release their second studio album, “Life No Get Dublicate” in... more
Influence
African
Latin American
Genre
afrobeat
Other Pages