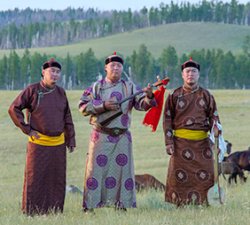 Tuvan herders move with their animals according to the season. Tuvan winters are very cold and summers are very hot. In summer the herders take their animals high in the mountains where it's cool. There they can rest and restore themselves after a long winter.

See all tracks (3)
Follow
Send Message
About
Alash Ensemble is a trio of master throat singers (xöömeizhi) from Tuva, a tiny republic in the heart of Central Asia. The ancient art of throat singing (xöömei) developed among the nomadic herdsmen of this region. Alash remains grounded in this tradition while expanding its musical vocabulary with new ideas from the West.